ITS America Webinar: How Infrastructure Technology is Being Deployed Around the World

How is technology being deployed around the world to win the 21st century infrastructure race? While much of the focus in Washington, DC is on Congress’ next steps on infrastructure, localities throughout the United States, Asia, Europe, and Australia are using technology to transform infrastructure to make their regions safer, smarter, and more resilient. How does America’s proposed nearly $600 billion investment in infrastructure compare to countries around the globe? How we can get the biggest return on our investments through deployment of technology? Join ITS America President & CEO Shailen Bhatt and his counterparts from Asia-Pacific, Europe, and Australia for this timely Infrastructure Week discussion!

ITS America, The Ray, and WTS Foundation will host Mineta Transportation Institute’s Jodi Godfrey as she presents research on “Attracting and Retaining a Diverse Transportation Industry Workforce.”

This webinar will summarize the report that was produced for the Mineta Transportation Institute which focused on background information and statistics that describe the current atmosphere of the transportation industry, and subsequent actionable recommendations to successfully attract and retain a more diverse workforce. This webinar will discuss eleven recommendations for consideration for organizations that are interested in attracting and retaining a more diverse workforce.

Please click here for more information and to apply for this opportunity.

The City of Glendale has an exciting opportunity for the position of Principal Engineer, Transportation.

Under general direction of the City Traffic Engineer, performs administrative and advanced professional Transportation engineering work and performs a variety of technical tasks relative to area of assignment.

Bachelor’s Degree in an Engineering specialty such as Civil, Transportation, or Water Resources and five years of increasingly responsible experience as a Professional Engineer in Transportation, including one year of lead or supervisory experience.

The position is open until filled.

Save the Date for 2021 ITS America Conference!

We are pleased to announce that planning for the 2021 ITS Arizona Annual Conference is well underway and that this year’s theme is “Reimagining ITS“.  The conference will be September 29th & 30th, 2021 at the Mesa Convention Center in Mesa, AZ. 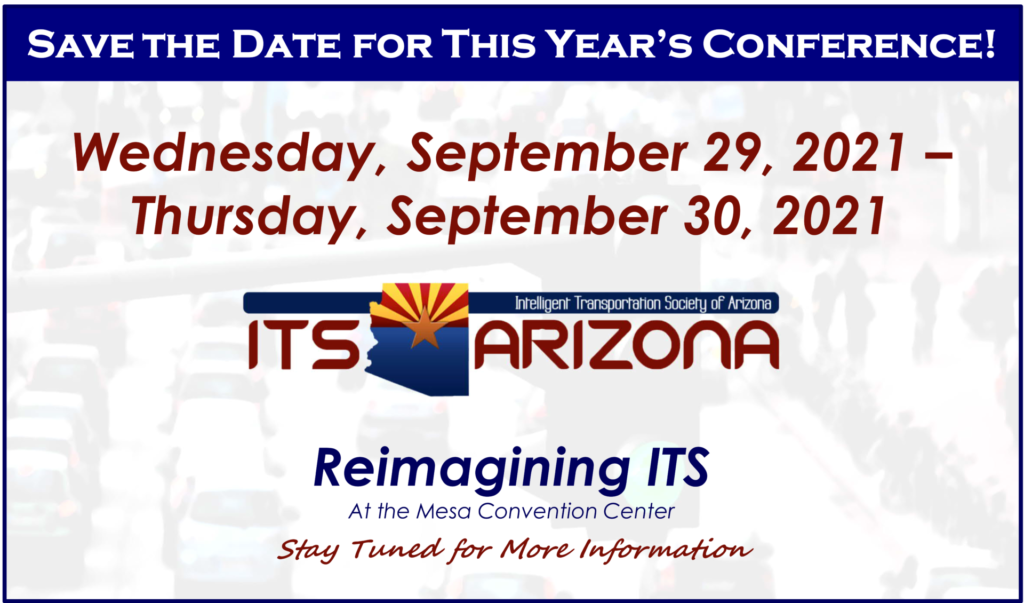