2015 Conference – A Conduit to the Future

The ITS Arizona 22nd Annual Conference was held on Wednesday September 30, 2015 and Thursday, October 1, 2015 at the Mesa Convention Center. The conference began with a half-day course on ‘Improving Safety with ITS’, courtesy of ITS America and the U.S. Department of Transportation’s Professional Capacity Building Program.

On the second day of the conference, a total of 28 presentations were available to attendees, including 3 from the finalists of the Student Paper Competition presenting their work. The Past Presidents’ Awards were given out, including the Member of the Year, which was posthumously awarded to Pete Yingling for his years of service to both ITS Arizona and IMSA. The winner of the Student Paper Competition was announced and the results of the elections for the 2015-16 ITS Arizona Board of Directors were presented.  Following on the success of the 2014 conference, we again had excellent attendance by both individuals and sponsors/exhibitors, and we hope to continue the trend at next year’s ITS Arizona 23rd Annual Conference.

2015-16 Board of Directors Election Results 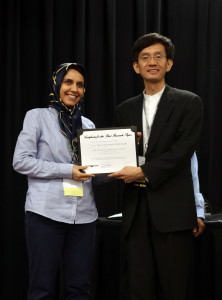