The second day of the conference began with a great keynote address and a panel discussion with the newly formed Arizona Self Driving Vehicle Oversight Committee. During the breakout sessions, a total of 24 presentations and a panel discussion were available to attendees, along with several opportunities to visit the booths of our great sponsors and exhibitors and learn more about their latest products and services. During lunch, the Past Presidents’ Awards were presented, including the Member of the Year, which was followed by a celebration of AZTech and its 20 Years of Innovation.  In addition, the ITS Arizona membership voted to approve amended bylaws, the undergraduate and graduate winners of the Student Paper Competitions were announced and the results of the elections for the 2017 ITS Arizona Board of Directors were announced.  Following on the success of the 2015 conference, we again had excellent attendance by both individuals and sponsors/exhibitors, and we look forward to continuing the trend at next year’s ITS Arizona 24th Annual Conference.

2017 Board of Directors Election Results

Miranda Aakre and Christian Tafoya, from Northern Arizona University, won the undergraduate competition for their paper titled “Pavement Data Collection: What Bikes Could Tell Us“. 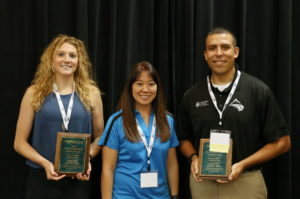 Chengchuan An, from The University of Arizona, won the graduate competition for his paper titled “Detecting Impacts of Communication Loss on Signal Performance Using Event-Based Data“. 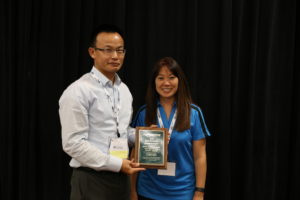